Presidential Race Continues To Tighten With Seven Weeks To Go

With just forty-nine days left in the campaign, and less than a week before the first debate, the race for President is tighter than ever.

With forty-nine days,  just seven weeks, left to go in the race for President, the race has largely continued in the holding pattern that I mentioned last week while the polls continue to tighten as we get closer to the first debate next Monday night. On the news front, the campaign was largely dominated by news about the candidate’s health that was prompted by an apparent fainting spell on Clinton’s part while she was at the memorial service for the victims of the September 11th attacks in New York City.  We later learned that Clinton had been diagnosed with pneumonia the previous Friday, a diagnosis which explained much about Clinton’s apparent condition over the previous weeks, including multiple episodes in which she appeared to be unable to shake a cough while speaking. While the press criticized the Clinton campaign for failing to disclose the Friday diagnosis earlier, the diagnosis resulted in Clinton taking several days off the campaign trail, not returning for events until Thursday, at which point she seemed to be in noticeably better condition and far more energetic than she had been leading up to the incident that prompted her to take time off the trail. The incident also led both Clinton and Trump to release additional health records, although in both cases physicians and others said that the information being released still wasn’t detailed enough. The other big news of the week came about when Donald Trump was asked yet again about his previous advocacy for allegations that President Obama was not a legitimate President because he was not born in the United States, an allegation he rode to the new heights of popularity in 2011 but which he’s largely avoided this time around. After being asked about it yet again, Trump came out late in the week and said that he now believed that the President was born in the U.S., but also advanced the largely false claim (see here, here, here, and here) that the birther story began with the Clinton campaign in 2008. As the week came to a close, apparent terror attacks in New York City and New Jersey seemed certain to set the stage for the final week of campaigning before the first debate, In any event, there were hardly any major developments in the race news-wise and both campaigns seemed to spend the week shoring up their own supporters rather than reaching out to new ones

Turning to the polls, we see that the race continues to tighten largely thanks to the fact that the margin between Clinton and Trump continues to shrink from the heights it was at just four weeks ago in the aftermath of the party conventions and several weeks of bad campaigning by the Trump campaign. In the RealClearPolitics two-way match up, for example, Clinton’s lead over Trump has shrunk to 1.3 points from the 5. 5 points it was at four weeks ago. In a four-way race that includes Gary Johnson and Jill Stein, Clinton’s lead stands at 1.1 points, down from the 4.4 points it was at four weeks ago. The measurements are roughly comparable for the Pollster two-way match up and the expanded average that includes Gary Johnson, although not Jill Stein. As the averages show, the race continues to tighten, but it is worth noting that, with the exception of the Los Angeles Times poll, which seems like a outlier given the fact that it has consistently shown Trump doing better than any other poll, and a Fox News poll that gives Trump a one-point lead, Clinton continues to hold the lead in the national polls. Additionally, as the charts show, there’s at least some indication that Clinton’s numbers may be ticking back up, but not by a terribly large amount.

Here’s the chart for the two-way race: 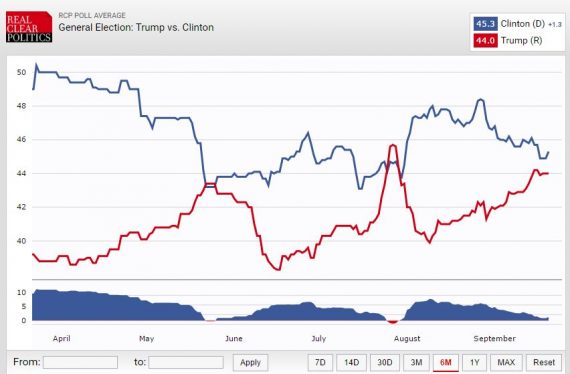 And the chart for the four way race: 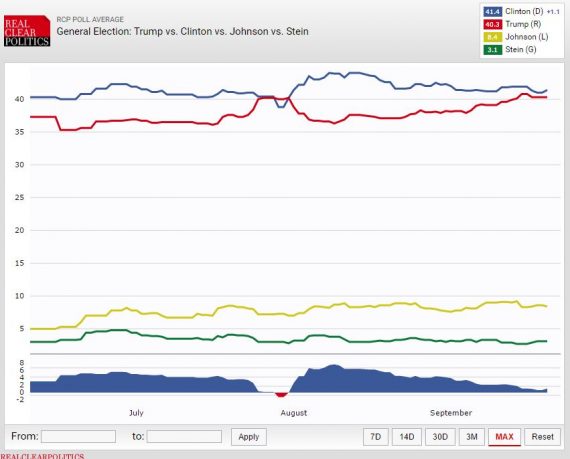 The tightening of the race at the national level has not unexpectedly filtered down to the states, where poll results are continuing to reflect the tightening we’ve seen in recent weeks. Perhaps the most notable changes have come in Florida, Missouri, and Ohio, where Donald Trump has taken a slight lead in the polls albeit within the margin of error, as well as in Colorado and Connecticut, where Clinton continues to lead, but by slightly smaller margins thanks to recent poll results. The result is an Electoral Map from RealClearPolitics that gives Clinton 200 Electoral Votes, Trump 164 Electoral Votes, and designates states totaling 174 Electoral Votes as “tossups.” Without tossups, Clinton continues to come out on top with 293 Electoral Votes to 245 for Trump. Obviously, this is a small Electoral Vote margin than Clinton has had in previous weeks, but with the polls continuing to tighten last week at the state level that’s to be expected. In reality, though, it’s worth noting that many of the changes at the state level were so small that they could easily be turned around rather quickly.

This kind of righter race is obviously being touted as good news by supporters of Donald Trump, and appears to be making at least some Clinton supporters nervous, but it’s largely to be expected. To a large degree we’re seeing the race falling into a pattern similar to what we saw in the closing weeks of the campaign in several recent Presidential elections, most notably the last four elections in 2000, 2004, 2008, and 2012. In each case, the final weeks of the campaign showed volatility, tightening, and at least one lead change before Election Day. To that extent this race seems to be following a similar pattern to ones we’ve seen before rather than one in which a landslide by either candidate seems likely. All of this could change after the debates, of course, and especially after the first debate next Monday, which will come just six weeks before Election Day and just days before many crucial states begin early and absentee voting. A notably good or bad performance by either candidate could have a major impact on the race.

With Eleven Weeks To Go, Hillary Clinton Appears To Be Unstoppable
Ten Weeks Out: The Presidential Race Tightens A Bit, But Clinton Still Lead
With Nine Weeks To Go, Clinton’s Post-Convention Bounce Seems To Have Disappeared
With Eight Weeks To Go, A Tighter Race But It’s Still Advantage Clinton