Donald Trump continues to appear to advocate ideas that harm American national interests and benefit Vladimir Putin. Draw your own conclusions as to why. 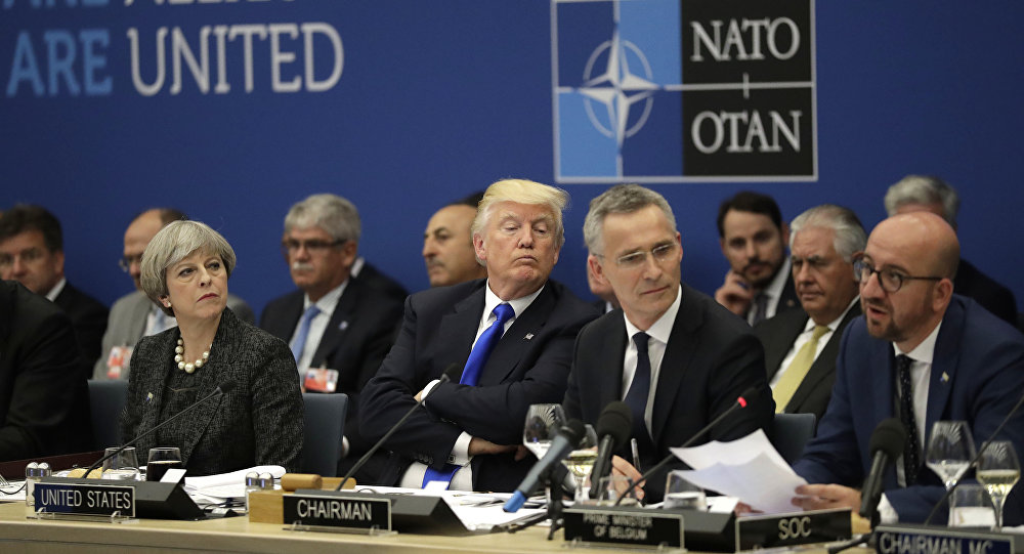 The New York Times is reporting that President Trump has openly talked about withdrawing the United States from the North Atlantic Treaty Organization, a report that is raising new concerns amid recent reports about the President’s relationship with Russia:

WASHINGTON — There are few things that President Vladimir V. Putin of Russia desires more than the weakening of NATO, the military alliance among the United States, Europe and Canada that has deterred Soviet and Russian aggression for 70 years.

Senior administration officials told The New York Times that several times over the course of 2018, Mr. Trump privately said he wanted to withdraw from the North Atlantic Treaty Organization. Current and former officials who support the alliance said they feared Mr. Trump could return to his threat as allied military spending continued to lag behind the goals the president had set.

In the days around a tumultuous NATO summit meeting last summer, they said, Mr. Trump told his top national security officials that he did not see the point of the military alliance, which he presented as a drain on the United States.

At the time, Mr. Trump’s national security team, including Jim Mattis, then the defense secretary, and John R. Bolton, the national security adviser, scrambled to keep American strategy on track without mention of a withdrawal that would drastically reduce Washington’s influence in Europe and could embolden Russia for decades.

Now, the president’s repeatedly stated desire to withdraw from NATO is raising new worries among national security officials amid growing concern about Mr. Trump’s efforts to keep his meetings with Mr. Putin secret from even his own aides, and an F.B.I. investigation into the administration’s Russia ties.

A move to withdraw from the alliance, in place since 1949, “would be one of the most damaging things that any president could do to U.S. interests,” said Michèle A. Flournoy, an under secretary of defense under President Barack Obama.

“It would destroy 70-plus years of painstaking work across multiple administrations, Republican and Democratic, to create perhaps the most powerful and advantageous alliance in history,” Ms. Flournoy said in an interview. “And it would be the wildest success that Vladimir Putin could dream of.”

Retired Adm. James G. Stavridis, the former supreme allied commander of NATO, said an American withdrawal from the alliance would be “a geopolitical mistake of epic proportion.”

“Even discussing the idea of leaving NATO — let alone actually doing so — would be the gift of the century for Putin,” Admiral Stavridis said.

Senior Trump administration officials discussed the internal and highly sensitive efforts to preserve the military alliance on condition of anonymity.

After the White House was asked for comment on Monday, a senior administration official pointed to Mr. Trump’s remarks in July when he called the United States’ commitment to NATO “very strong” and the alliance “very important.” The official declined to comment further.

American national security officials believe that Russia has largely focused on undermining solidarity between the United States and Europe after it annexed Crimea in 2014. Its goal was to upend NATO, which Moscow views as a threat.

Russia’s meddling in American elections and its efforts to prevent former satellite states from joining the alliance have aimed to weaken what it views as an enemy next door, the American officials said. With a weakened NATO, they said, Mr. Putin would have more freedom to behave as he wishes, setting up Russia as a counterweight to Europe and the United States.

An American withdrawal from the alliance would accomplish all that Mr. Putin has been trying to put into motion, the officials said — essentially, doing the Russian leader’s hardest and most critical work for him.

In light of recent and past developments regarding the Trump Administration and Russia, and the relationship between the United States and the nations that are supposed to be our most important allies, this report is alarming, to say the least. Within just the last week, for example, it was reported that, in the wake of his meeting last July in Helsinki with Russian Prime Minister Vladimir Putin, President Trump declined to brief his aides about what had been discussed between the two men during their one-on-one meeting with only translators and that he had confiscated the notes taken by the translator and ordered him not to discuss what had occurred in the meeting even with top members of the White House Staff. As I noted at the time, Trump’s behavior at the post-summit press conference with Putin raised serious questions about what he and the Russian leader had discussed or agreed to in their meeting, and arguably made a case for calling the translator before a Congressional Committee to determine what the two men had discussed that he was so unwilling to talk about. In addition to these reports, The New York Times reported that the F.B.I. had taken the extraordinary step of opening a counterintelligence investigation centered around the President in the wake of his admission that he fired former F.B.I. director James Comey because of the Russia investigation. In the wake of those revelations, as well as other evidence of Trump’s long-standing efforts to undermine the Russia investigation, the fact that this President would discuss the idea of withdrawing the United States from NATO

In addition to these recent developments, the first two years of Trump’s Presidency has included a number of occasions when he has seemingly acted against American national interests with regard to our relationships with our closest alliest. For example, when the President visited Europe for the first time in 2017, he left in his wake with many of our closest allies wondering just how committed the President was to the alliance and to its collective defense principles notwithstanding later assurances regarding that commitment on his part.

Outside of that, Trump has engaged in a number of other policies that have significantly soured the relationship between the United States and its allies, particularly our NATO allies. Last month, for example, the President revoked the exemption from the steel and aluminum tariffs that had been announced back in March that applied to American allies in Europe as well as Canada and Mexico. In doing so, Trump claimed that he was taking this action for “national security” reasons. Objectively speaking, of course, the idea that these allies are a national security threat to the United States, or that we could not rely on them as a source for aluminum and steel in the event of a national emergency or military threat is absurd. Needless to say, this didn’t go over very well with our allies in Europe and elsewhere. Canada’s Foreign Minister called the new tariffs “absurd,” for example, and European Union officials announced retaliatory tariffs against American goods. Things got even more bizarre in this regard as Trump exchanged harsh words with Canadian Prime Minister Justin Trudeau prior to the G-7 Summit. Once he was at the summit, Trump essentially did everything he could to alienate America’s closest allies, thereby seemingly achieving a goal that Russia and, before it, the Soviet Union had only dreamed of, driving a wedge between the United States and its allies. After the Singapore Photo Op Summit, Trump continued his tirade against Trudeau, while polling revealed that Canadian public opinion about the United States was suffering as a result of American actions and the President’s rhetoric. Finally, it was reported at the same time that the President was considering what would effectively be a ban on German-built luxury automobiles, a threat that he continues to make.

In short, Donald Trump has done more damage to America’s international alliances than the Soviets could have ever dreamed of, and it will inevitably inure to the benefit of Russia and China. Now we have this report that the President of the United States, the man who supposedly stands in the shoes of Presidents like Truman, Eisenhower, Kennedy, Reagan, Clinton, Bush, and Obama, who cultivated relationships with our closest allies and were committed to strengthening the NATO alliance and continuing its legacy of keeping the peace for the past seven decades, is openly speculating about the idea of withdrawing from what is the unquestionably the most successful and important peacetime alliance in American history and perhaps the most important and effective such alliance in history. Because of Donald Trump, we and our allies are left wondering if this alliance, and others that the United States has built with allies in the Pacific such as Japan, South Korea, and Australia, will be there the next time its need it. The way the President is acting, the answer to that question is becoming increasingly doubtful and the only person that benefits is Vladimir Putin, who as I’ve said before appears to be succeeding in ways that the leaders of the former Soviet Union could only dream. With very little cost on his part, he has an American President who is driving a wedge between the United States and its most important allies. Whether that makes Trump a knowing asset of Russia, a compromised individual who is somehow being blackmailed, or just what Vladimir Lenin once referred to as a “useful idiot” hardly matters. The damage to American national interests would be deep and long-lasting and would take years for any future President to repair.