A new Gallup poll shows public approval of Congress once again approaching historic lows, but it means far less than anyone thinks.

A new Gallup poll shows that Americans still really, really don’t like Congress and that, despite the fact that their party has control of both the House and Senate for the first time in eight years, Republicans like it the least:

Congress’s approval rating has slipped to the lowest level this year, according to a poll released Wednesday by Gallup.

The poll found 11 percent of people in the United States approve of Congress, which is its lowest job approval rating this year.

It’s also only 2 percentage points higher than the all-time low of 9 percent approval from November 2013 after the last government shutdown.

Meanwhile, 86 percent of the public said they disapprove of Congress.

Gallup began tracking congressional approval ratings 41 years ago and the ratings since 2011 have been among the worst recorded. Congress experienced a record-high 84 percent approval rating in October 2001, a month after the 9/11 terrorist attacks.

The new survey also found 8 percent of Republicans said they approve of Congress while 13 percent of independents and 11 percent of Democrats said the same about lawmakers on Capitol Hill.

There’s nothing new about the revelation that the American people are dissatisfied with the job Congress is doing, of course. It’s a theme that we’ve hit upon here at OTB, and that has been a part of the news cycle, for virtually the entire Obama Administration and stretching back into the final years of the Bush Administration, and it’s one that has largely been true regardless of which party was in control of the Legislative Branch during that time period. A month after the 2010 midterms, for example, when the lame duck Democratic Congress was just finishing up its work, Gallup’s poll showed had Congressional job approval had hit a then all-time low of 13%, a number that seemed understandable given the massive changes that voters had just endorsed at the ballot box. Things seemed to improve when Republicans officially took over the House a month later, but that was likely a reflection of public optimism that the changes they had just voted for would change things on Capitol Hill for the better.  Just three months later, though, there were signs that the public was already losing patience with the Federal legislature as Congressional job approval slipped to seventeen percent, and things only got worse as time went on. A CBS News/New York Times poll in the immediate aftermath of the debt ceiling showdown of the summer of 2011 found that 82% of Americans disapproved of how Congress was doing its job. A follow-up poll a month later found that public approval of Congress had slipped to a stunningly low six percent of the public. Things weren’t much better a year later when Gallup looked at the numbers again and found that public approval of Congress stood at ten percent, although that number had improved to some degree by October of 2012, just a month before the General Election in which the status quo was largely maintained on Capitol Hill. As President Obama began his second term, Gallup found that public approval had slipped yet again, and when it measured the number in the midst of the October 2013 government shutdown only 11% of Americans said they approved of the job Congress was doing. A month later, after the shutdown had ended and Americans were dealing with the shaky roll out of the Affordable Care Act, just nine percent of Americans said they approved of Congress, and a month after that the number hit seeming rock bottom with just six percent of Americans having a positive opinion of the part of the Federal Government that is supposed to be closest to the people. Most recently, Gallup found in August that public approval of Congress had hit fourteen percent, not its lowest number ever but also now very respectable. Now, we have this poll showing the public’s approval of Congress in danger of slipping back into single digits.

The best way to see the track that public approval of Congress has taken, though, is from Gallup’s own chart: 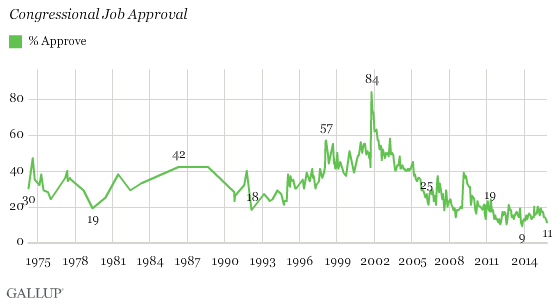 Perhaps the most interesting part of the number, though, is the way it breaks down by party:

Frustration with the party leadership may explain why Republicans (8%) are slightly less likely to approve of the job Congress is doing than either independents (13%) or Democrats (11%), even though Republicans have majority control of both houses. Usually, Congress’ approval ratings are significantly higher among supporters of the majority party.

Republicans’ more negative evaluation of Congress is a recent development. In the first poll Gallup conducted entirely after the GOP assumed control of the Senate earlier this year, Republicans (27%) were significantly more likely than Democrats (17%) and independents (18%) to approve of Congress, consistent with the historical pattern.

But in the spring and early summer months, Republicans’ views began to sour, as the party made little progress in achieving its legislative goals. Those views got worse through the summer and early fall — by July, only 11% of Republicans approved of Congress, and their approval since then has slipped further to 8%. Since July, Democrats’ and independents’ ratings have been consistently higher than Republicans’, although Democrats and independents also view Congress quite negatively.

Some of the top Republican priorities at the start of this year included approving the Keystone XL pipeline, passing immigration reform, rolling back financial regulations and repealing major parts of President Barack Obama’s healthcare law, none of which has been accomplished. More recently, rank-and-file Republicans’ disappointment with their congressional leadership may have been reinforced by Congress’ failure to block the nuclear deal the Obama administration helped negotiate with Iran and to strip Planned Parenthood of its federal funding.

The chart showing approval of Congress broken down by party is also illustrative of what’s going on: 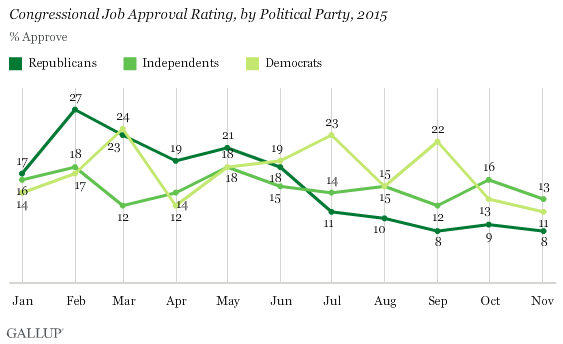 Gallup’s assessment of the reasons behind Republican disapproval of Congress notwithstanding the fact that their party has full control of the body strikes me as being largely correct. At the same time, though, I might suggest that there slightly different reasons for it. On the one hand, there is obviously a significant part of the Republican base that finds itself frustrated with Congress at the moment because of what they perceive as an ability to follow through on promises that have been made in elections going back to 2010. The Affordable Care Act, for example, has not been repealed or even significantly scaled back notwithstanding countless numbers of votes on the issue since Republicans took the House in 2010. Similarly, it not doubts seems from the outside as if Republicans have done little to even try to push back on issues such as regulations, the Iran nuclear deal, spending, or a whole host of other issues. Instead, there has been at best minimal progress on these issues from their point of view and, perhaps even worse, a significant degree of compromise with Democrats in Congress and the White House. This is why you’ve seen so much opposition to Congressional leadership from the right, and it was the motivating force behind the events that led to the resignation of John Boehner, the decision of Kevin McCarthy to not stand for election as Speaker, and conservative opposition to newly installed Speaker of the House Paul Ryan notwithstanding the fact that Ryan had long been a hero on the right. In addition to this hard-line base in the GOP, though, I’d suggest that there is also a segment of the party that is frustrated that leadership has seemingly been too accommodating to the obstructionist wing of the party and not willing to push back against a group that seems more interested in fundraising and making speeches than actually accomplishing anything, and which is doing real damage to the party’s fortunes going forward.

Whatever the reasons, though, it’s clear that Congress remains on everyone’s bad side, and that seems likely to continue going forward. As it has always been in the past, though, that is not likely to lead to significant changes when we get to the General Election next year. Instead, it’s likely that most members of both the House and Senate who stand for re-election will be easily re-election. In 2014, for example, the Center for Responsive Politics found that 94% of House Members were re-election, the highest rate since 2004 as this chart demonstrates:

Even in the Senate, where Republicans picked up a net of nine sets and recapture control for the first time since before the 2006 election, 82% of the Senators who stood for re-election were returned to office, lower than the previous three cycles, but better than the election in 2006: 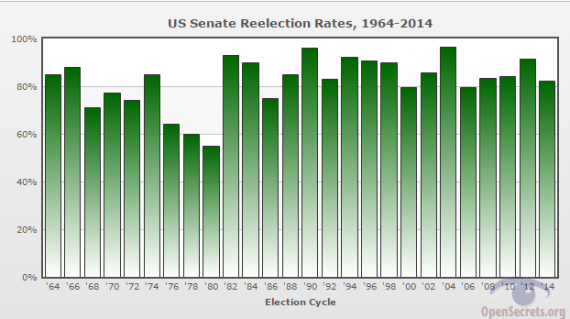 Unless and until those numbers change, these Congressional “job approval” numbers are, in the end, pretty much meaningless.