The biggest surprise of the Presidential race to date is the fact that Mitt Romney has lost the edge he once had on economic issues. 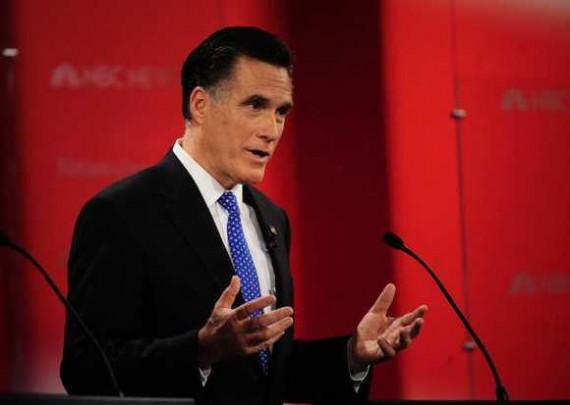 For the better part of a year now, the conventional wisdom was that the Presidential election would be, almost exclusively, a referendum on the state of the economy and President Obama’s response to it over the past several years. To many observers, it seemed clear that this was something that would work to Mitt Romney’s advantage both because of his business background and because of the fact that, especially this summer, the economic statistics seemed to be suggesting an economy that was slowing down and possibly even heading into recession. Indeed, up until very recently, polling consistently showed that Romney was leading the President on the question of who would best be able to handle the economic troubles the nation faces. Then, something interesting happened. In what Forbes is calling the real October Surprise, the economy slipped away from Romney:

In the gaffe-termath of Romney’s “47 percent” video, we spent the past week wondering exactly what bombshell would drop next.

Well, there were no bombshells last week.  At least not by the standards set by this most gaffe-happy campaign season. In fact, the GOP nominee enjoyed a relatively calm week, allowing him time to focus on his core message regarding the economy, and to prep for the first presidential debate on Wednesday.  And the respite in fact may have helped him.  According to Traackr – an online influence monitoring tool — “the economy” topped the list of phrases most often used last week (119 mentions) by 50 online influencers in the 2012 election.  But a closer look at the numbers — and the context — for last week’s conversations suggest that “the economy” as a campaign theme may have slipped away from Romney.

First problem for Romney is that there is now a broader discussion of the economy, in part the result of “the 47 percent” fiasco.  After “the economy,” the phrase most often used by top influencers last week were “the 47 percent” (69 mentions), “the Middle East” (54 mentions), and “early voting” (39 mentions).  The fact that “the 47 percent” is still driving so much conversation is of course meaningful.  It’s not just the volume of the conversation.  It’s also the way “the 47 percent” is helping to reframe the discussion around the economy.   The Romney-Ryan storyline (rebooted, again, this week) of a better economy with less government intervention has been supplanted in part with a Democratic storyline of a better economy for all.  Granted, Romney and Ryan have been working diligently to retell their economic story in a way that is more inclusive.  But with “the 47 percent” story still looming large, it’s a hard sell.

Of course, Romney started losing ground on the economy even before the “47 percent” video became public. If anything, the video simply made worse something that was already happening. The question is why it was happening to begin with, especially since it has happened at the same time that we’ve been treated to some particularly gloomy economic statistics. Some have suggested that Romney and Ryan’s unwillingness to give any concrete details of the plans for the economy and the budget are part of the problem, and I certainly think that’s part of the problem. Some have argued that the relatively flat Republican National Convention, followed as it was by the Democratic Convention that was highlighted by a particularly effective speech by Bill Clinton are what’s responsible for the bend in public opinion. That speech was very good, and the President has gotten quite a good bounce in the polls from the convention, but I’m not sure we can give it all the credit for what’s happened here.

A closer look at some of that same polling data helps explain it. The most dramatic figures come from the Pew Research Center for the People & the Press, which routinely asks voters about the news they are hearing about the economy. In August of 2011, Americans of all parties said the news was mostly bad, with only minor differences showing between members of different political parties.

A year later, a survey taken in early September found a “record partisan gap.” A full 60% of Republicans said they were hearing “mostly bad” news. Only 15% of Democrats reported the same. And independent voters split on the question, with 36% saying they were hearing mostly bad news.

It’s not just a matter of what voters are hearing. Gallup’s tracking of Americans’ reported confidence in the economy has also seen a dramatic divergence: Democrats’ confidence reached a new high in a survey released September 25; Republicans’ reached a record low.

An online survey by the firm CivicScience, among those that has sought to develop reliable online metrics, found that among the Romney supporters it surveyed over the last three months, 96% labeled the economy “weak.” The corresponding figure for Obama supporters is 55%, according to the company’s data director, Ross McGowan.

The pattern is a familiar one to pollsters and political scientists alike, though some say it has intensified with the changing and increasingly partisan media.

“Cues and signaling from the political leaders definitely influence how people experience their own lives,” said Democratic pollster Harrison Hickman, who said he’d seen the trend “aggravated in recent years.”

This isn’t necessarily a new phenomenon, Michael Barone noted the same thing in a column he wrote when Barack Obama’s Presidency was just a few days old:

Americans’ views of the economy are increasingly a function of voting behavior or party loyalty, rather than the other way around. The most succinct evidence of this comes from a January 2006 report by the Pew Research Center for the People and the Press entitled “Economy Now Seen Through Partisan Prism.” As the Pew report notes, during the1992 campaign year and up through 1994 there was a partisan divide on the economy, with about 20 percent of Republicans and less than 10 percent of Democrats rating it as excellent or good. From 1995 to 1998, with a Democratic president and a visibly aggressive Republican Congress, Democrats and Republicans gave similar ratings to the economy. From 1998 to 2000, Democrats were somewhat more positive about the economy than Republicans, at a time when economic growth was vibrant and inflation low.

Then, after the election of George W. Bush, the divergence between the two parties expanded into a chasm. It began to widen during the recession of March-November 2001, and it widened much more as the economy recovered and resumed low-inflation growth. By early 2006, a time of vibrant economic growth, 56 percent of Republicans said the economy was excellent or good, while only 28 percent of independents and 23 percent of Democrats agreed. We have seen similar responses in the years since, although the percentage of Republicans rating the economy positively has dropped somewhat since the subprime mortgage crisis and the decline in housing prices during the second half of 2007. As the Pew Research Center points out, Democrats and Republicans of similar income levels gave sharply different ratings of the economy.

There is a divergence here between Democrats’ and independents’ assessments of their personal economic condition, which have generally been positive, and their assessments of the economy as a whole. It’s hard to resist the conclusion that when Democrats—and, in 2004-2006, independents—were responding to questions about the condition of the economy, they were actually responding, “I am a Democrat,” or, more emphatically, “I hate George W. Bush.”

In other words, people’s perception of the economy in general, and their own economic situation in particular, is now influenced being heavily by their partisan biases. In that respect, this is yet another reflection of the polarization that has become such a pervasive part of our politics and our culture. We’re approaching the point where hardcore partisans on each side don’t just have different opinions, they have different facts, and that never ends well.

I would suggest that this gap in perceptions about the economy also explain, in part, why people on the right are so insistent in denying that the polls showing the President leading and Romney slipping behind, especially in swing states, must clearly be wrong. The Pew Poll taken in September showing that 60% of Republicans surveyed said that the news they were hearing about the economy was mostly bad. By contrast, 36% of Independents said that, and only 15% of Democrats agreed that most of the news they were hearing about the economy was wrong. Among Democrats, I tend to agree with Andrew Sullivan that the low number is largely a refection of their reaction to the Democratic National Convention, including Clinton’s speech. Their enthusiasm about the race and about the President was enormously positively impacted by those events, and they seem to have bought into the idea that Clinton pushed in his speech that the President did the best he could under the circumstances that existed when he entered office. Arguably, the Democrats have a bit of a rose-colored glasses thing going on here, because all one needs to do is look at the latest jobs report or the fact that the economy only grew at a 1.3% pace in the second quarter to see that things aren’t very good at all. At the same time, Republicans seem to have an overly pessimistic view of the economy that doesn’t acknowledge that the U.S. is still doing far better than Europe and we’ve been growing our economy since early 2009. I bet if the President were a Republican, their attitude would be very different.

This is why you see the Romney/Ryan campaign moving into areas like foreign policy and trying to tie the argument about the economy into the deficit. As Dave Schuler noted this morning, though, Romney’s arguments about foreign policy have lacked any real substance, and there’s very little evidence that the deficit is an issue that strongly motivates voters. So, this leaves the Romney campaign with a conundrum. Their strongest issue is slipping away, and they don’t seem to be able to make inroads in other areas. It will be interesting to see how Romney tries to play this during Wednesday’s debate.