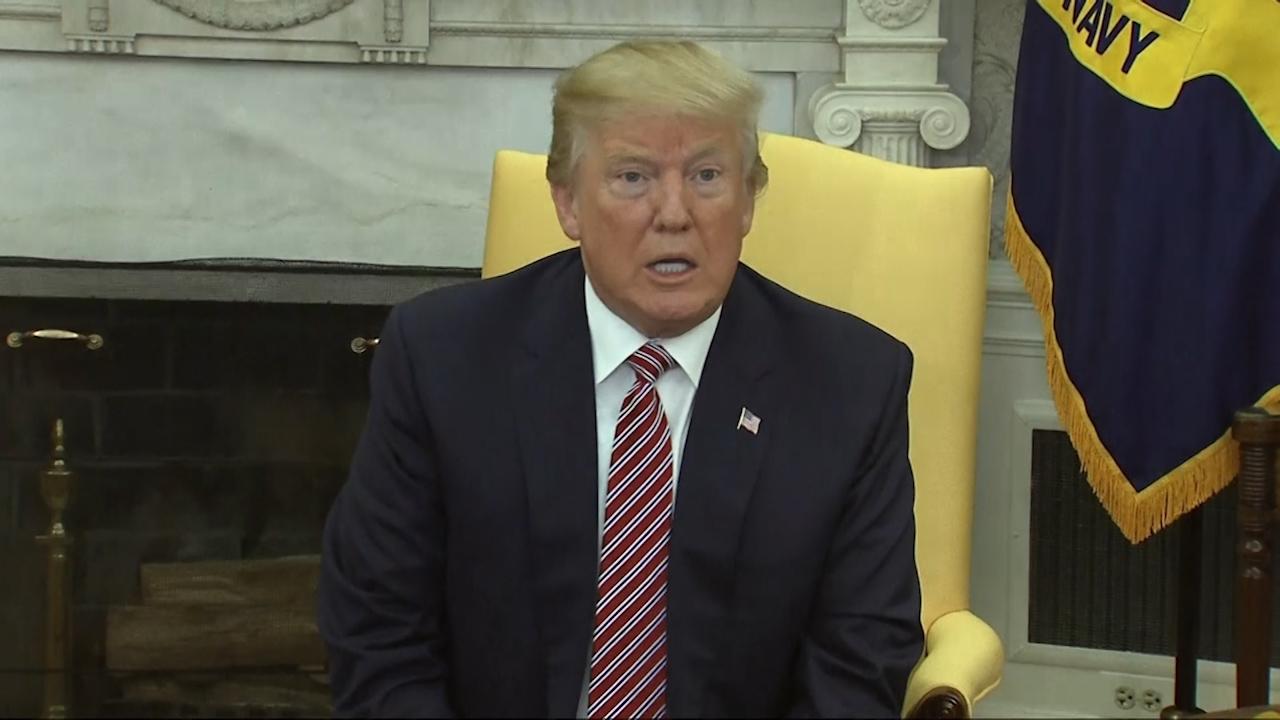 Keeping with his seeming habit of using the pardon power to make political points, President Trump announced today that he is pardoning Dinesh D’Souza, the far-right commentator who was convicted in 2014 of violating campaign finance laws:

WASHINGTON — President Trump on Thursday pardoned Dinesh D’Souza, a conservative author, commentator and filmmaker, and said he was strongly considering commuting the sentence of former Gov. Rod R. Blagojevich of Illinois, a Democrat.

Flexing his clemency power as he and his team face multiple criminal investigations of their own, Mr. Trump also said that he was thinking about the case of Martha Stewart, the lifestyle mogul who spent five months in prison for lying to investigators about the timing of a stock sale.

The president was focusing on cases where he argued that the justice system had unfairly treated celebrity figures, all of whom were convicted of crimes that in some ways mirrored charges that have been made or mentioned in connection with allies of Mr. Trump in recent weeks, including campaign finance violations and lying to investigators.

All three have connections, if sometimes distant, to Mr. Trump, either through political allies or his time in the private sector. Senator Ted Cruz, a Texas Republican who greeted Mr. Trump as he arrived for a visit to Houston on Thursday, pushed for the pardon for Mr. D’Souza. Mr. Blagojevich appeared on “Celebrity Apprentice,” Mr. Trump’s reality show, and Ms. Stewart hosted an “Apprentice” spinoff show.

As for Mr. Blagojevich, he was prosecuted by Patrick J. Fitzgerald, a close friend and colleague of Mr. Comey. Mr. Trump previously pardoned I. Lewis Libby Jr., a top aide to former Vice President Dick Cheney, who was also prosecuted by Mr. Fitzgerald.

Will be giving a Full Pardon to Dinesh D’Souza today. He was treated very unfairly by our government!

Not surprisingly, D’Souza is celebrating:

D’Souza in a tweet took aim at Bharara, the New York prosecutor who was behind D’Souza’s 2013 conviction for illegal campaign donations.

“KARMA IS A BITCH DEPT: @PreetBharara wanted to destroy a fellow Indian American to advance his career,” D’Souza tweeted.

“Then he got fired & I got pardoned,” he added.

n a second tweet, the author accused Bharara of forcing his confession on the illegal donation charge by threatening him with an unrelated charge that carried a prison term.

“Bharara & his goons bludgeoned me into the plea by threatening to add a second redundant charge carrying a prison term of FIVE YEARS,” he said.

D’Souza later expanded on his attacks on Bharara in an interview with conservative radio host Laura Ingraham.

“With regard to Preet Bharara, I see him with along with Eric Holder as part of this Obama team of goons that was unleashed to get me in retaliation for the movie I made about Obama,” he said.

“I think Bharara’s was that he would prove by getting a fellow Indian he would endear himself to the Obama team,” D’Souza added. “Preet Bharara got fired by Trump and I got pardoned, so that’s how it all ended up.”

Obama & his stooges tried to extinguish my American dream & destroy my faith in America. Thank you @realDonaldTrump for fully restoring both

Bharara & his goons bludgeoned me into the plea by threatening to add a second redundant charge carrying a prison term of FIVE YEARS https://t.co/5Z4UjWaHtF

The President has the right to pardon but the facts are these: D’Souza intentionally broke the law, voluntarily pled guilty, apologized for his conduct & the judge found no unfairness. The career prosecutors and agents did their job. Period. https://t.co/bA3I8vs4QQ via @politico

This all began, of course, four years ago when D’Souza, who had made a name for himself in conservative circles for his anti-Obama films that hit all the hot buttons from allegations that the former President was secretly Muslim to drawing into question whether he was born in the United States, was indicted for violating Federal election laws. As the indictment alleged, D’Souza had convinced two associates to donate $10,000 each to the campaign of Wendy Long, the Republican running a seemingly unwinnable race against New York Senator Kristen Gillibrand in 2012, and then reimbursing them for the full amount of their donations out of his own pocket. In so doing, D’Souza was quite obviously evading the 40-year-old law that places monetary limits on the amount that an individual can donate to any one political candidate. Since there was no basis for rebutting the facts as alleged, D’Souza instead pursued a defense. In this manner, the indictment alleged, D’Souza was able to evade the 40-year-old law that limits the amount that an individual can contribute to a political candidate. For his part, D’Souza and his supporters, a group which quickly dwindled after he was indicted, claimed that the entire prosecution was an example of political targeting by the Obama Administration and that D’Souza was only being prosecuted because of his criticisms of the President over the past five years. When the efforts to provide any evidence to support that claim failed, D’Souza entered a guilty plea to the charges against him and was sentenced to eight months in probation and fined $30,000.

This isn’t the first pardon that President Trump has issued to someone who is both politically controversial and someone that conservative activists who have rallied behind. In August of last year, for example, he pardoned former Maricopa County, Arizona Sheriff Joe Arpaio, who had been convicted of contempt of court for refusing to comply with orders from a Federal District Court Judge regarding the operation of his department. Arpaio, of course, has since entered the race for the Republican nomination to succeed Jeff Flake in the Senate. Last month,  Trump pardoned I. Lewis “Scooter” Libby, the former Chief of Staff to former Vice-President Dick Cheney who had been convicted of lying to investigators in connection with the Valerie Plame matter. Trump has also pardoned the late Heavyweight Champion Jack Johnson who had been convicted in 1913 of violating the Mann Act in a prosecution that was obviously tainted by racism. While this pardon was not really political and seems justified by the facts, it’s worth noting that it came at the urging of celebrity supporters such as Sylvester Stallone who used their connection to Trump to urge the action.

The other issue that this pardon raises, of course, is the signal it sends to people who are currently in the radar of Special Counsel Robert Mueller or other Federal investigators such as Michael Cohen, Michael Flynn, and Paul Manafort. Ever since the first charges were issued in connection with the Russia investigation, there has been speculation about whether or not Trump would utilize the pardon power to attempt to interfere with Mueller’s investigation by taking the threat of prosecution off their minds, thus making it less likely that they would cooperate with Mueller. This is especially relevant given the fact that one of Trump’s attorneys had dangled the possibility of pardons for Manafort and Flynn at some point last year. That attorney was John Dowd, who has since left the Trump legal team, but the possibility of Trump seeking to disrupt the investigation by taking this step remains on the table. What the consequences of such an action might be would have to wait until Trump actually acted, but even several Republican Senators have suggested it could be a last straw.

Commenting on the D’Souza pardon, Greg Sargent argues that Trump’s pardons to date have basically all been about right-wing trolling:

First, let’s put this in context. Trump’s previous pardons were granted to the authoritarian racistJoe Arpaio; Kristian Saucier, a sailor convicted in a case in which he photographed classified spaces on a submarine, who became a cause celebre on the right when conservatives tried to use him as an argument for why Hillary Clinton should be punished for having a private email server; Lewis “Scooter” Libby, who revealed the name of a covert CIA operative in order to discredit her husband, a critic of the Bush administration; and the boxer Jack Johnson, whose case was championed by Sylvester Stallone.

In other words, with the exception of Johnson’s pardon — which Trump gave solely because a celebrity asked him to — all of his pardons were meant as favors to the right wing.

D’Souza’s own story, in some ways, mirrors that of American conservatism over the past few decades. As a student at Dartmouth in the 1980s, he ran the conservative “Dartmouth Review,” a publication that reveled in being politically incorrect, which in its case meant publishing racist material and outing closeted gay students. Hailed as a rising conservative star, he obtained a sinecure at the Heritage Foundation, worked in the Reagan administration, and published books decrying liberalism’s effect on America. In 1991, this paper called him ”the polemical darling of the season.”

But as time went on, D’Souza’s ideas became increasingly conspiratorial and noxious. He wrote multiple books on Barack Obama, charging that the former president, driven by a need to punish white people for the sins of colonialism, had hatched a plan to destroy America. His latest book is titled “The Big Lie: Exposing the Nazi Roots of the American Left,” in which he not only argues that Hitler took his inspiration from Democrats, but takes the fact that, during the 1860s, the Democratic Party was the conservative, slavery-supporting party — not exactly a secret, but a fact that he presents as though it’s a shocking discovery he just made — and spins it into a decades-long conspiracy proving that Democrats are The Real Racists.

In other words, D’Souza has been a right-wing troll since he was in college and in the years that followed. He attempted to use that history as evidence that his 2014 prosecution was politically motivated and failed, so he ended up pleading guilty and receiving a light, but under the sentencing guidelines appropriate, sentence. Since he completed his sentence several years ago, he has gone back to his old ways of political trolling. Now, he’s been pardoned. You can expect we’ll be hearing more from him in the future. This is, after all, the age of Trump.