Happy New Year From Outside The Beltway! 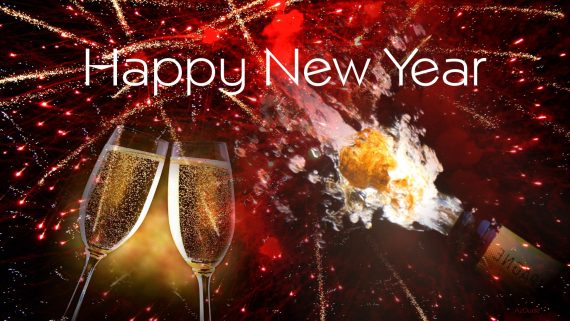 From all of us at Outside The Beltway, I convey our best wishes to all of you for a healthy, happy, and enjoyable new year. Hopefully, most of you reading this didn’t overdo it last night or, you know, do something crazy like stand outside in bone-chilling temperatures to watch a ball drop from the top of a building in New York City. Whatever the case, though here’s hoping that the new year brings you health, happiness, and success in whatever ventures you may undertake.

As we headed into 2017, the main focus, of course, was looking ahead to the beginning of a new Presidency three weeks later. While those of us who have paid attention to Donald Trump since long before he entered the political arena, and certainly anyone who followed his campaign when it began in June 2015, knew that we were in for a bumpy ride, I’m not sure anyone could have anticipated just how bizarre a ride it had been. Less than 24 hours after he had been sworn into office, Trump was speaking before employees claiming falsely that his Inauguration Day crowd was bigger than Obama’s and his Press Secretary used the occasion of his first press conference to make the same easily disprovable claim. In retrospect, those two moments became something of the theme for the year to come. On a nearly daily basis, we saw the President making outrageous comments, usually via his Twitter account, that would quickly become the hottest news story of that particular week and, quite often, would trample all over whatever political message his own advisers were trying to send out.

Beyond Trump’s Twitter account, of course, the two biggest news stories of the past year were the failures and successes of the Trump/GOP agenda on Capitol Hill and an investigation into Russian efforts to interfere in the 2016 election that quickly expanded to include allegations of actual or attempted collusion between the Russians and members of the Trump campaign.

On the legislative front, much of the year was at best a mixed bag for the Administration and Republicans on Capitol Hill. One of the more notable and consequential successes came early in the year with the confirmation of Neil Gorsuch to the U.S. Supreme Court. Of course, that confirmation happened mostly because Senate Republicans took the step of ending the filibuster for Supreme Court nominations, thus completing the process that had been started by Senate Democrats in November 2015 when they eliminated the filibuster for other judicial nominations as well as nominations for Executive Branch positions. Beyond that, the spring and summer were taken up by the GOP’s effort to ‘repeal and replace’ the Affordable Care Act. After initially failing to get a bill passed, House Republicans managed to get their version of ‘repeal and replace’ passed with a bare majority. Things didn’t go quite so well in the Senate, though. Thanks in no small part to the fact that the GOP started the year with only a two-seat majority, Republicans went through a two month period in the summer during which they were forced to repeatedly forced to withdraw proposed bills due to a lack of support from a handful of holdout Republicans. When a bill was finally brought to the floor, it was defeated in dramatic fashion by a thumbs-down from an ailing John McCain, who had been diagnosed with brain cancer earlier in the year. It wasn’t until the end of the year when Republicans finally got their act together and passed a major piece of legislation in the form of a tax cut bill that will have unforeseeable implications for taxpayers and the economy in the years ahead.

On the Russia investigation front, the story became more complex and far more deeply rooted than anyone could have imagined. That investigation kicked into high gear after President Trump fired F.B.I. Director James Comey just days after Comey had testified before a Congressional committee and confirmed that the Bureau was investigating both issues. While the Administration initially claimed that Comey had been filed due to his handling of the investigation into Hillary Clinton’s emails, it quickly became apparent that this was merely a ruse and that the Russia investigation was Trump’s real motivation for the decision, something that he ended up acknowledging himself. This led directly to the appointment of former F.B.I. Director Robert Mueller as special counsel, something that has turned into something of a major source of frustration for the Trump Administration generally and Donald Trump specifically. By the end of the year, Mueller will have secured indictments against former Trump Campaign Director Paul Manafort and his associate Rick Gates and plea agreements from George Papadopoulos, who served as a foreign policy adviser to the campaign, and former National Security Adviser and retired Lt. General Michael Flynn, a sign that his investigation is unlikely to end anytime soon.

On the international front, we managed to make it through the year without any real major international crises, but that doesn’t mean things went well for American national interests. From virtually the first day he took office, President Trump engaged in a course of behavior that seemed designed to alienate long-standing American allies, especially European allies such as the United Kingdom, France, and Germany, while currying favor with authoritarian regimes in Egypt, Saudi Arabia. and The Philippines. In his trips two Europe, Trump seemed to call into question just how committed the United States was to the collective defense principles established by in the NATO Treaty, placed the United States outside the consensus of the rest of the world by withdrawing from the Paris Climate Accords, and called our commitments in the Pacific into doubt with his decision to withdraw from the Trans-Pacific Partnership, a trade treaty that would have created a powerful bloc against China’s efforts to expand its economic and political influence in the region.

If there was a major international story for the year, though, it was probably the increase in tensions on the Korean peninsula. While the Kim regime in Pyongyang pushed forward with its efforts to expand its nuclear and ballistic missile programs, Throughout the year, it became apparent that North Korea was moving toward both more powerful nuclear weapons and the ability to launch missiles capable of reaching the mainland United States as well as parts of Europe. The Trump Administration responded with some of the harshest rhetoric of any recent Administration on record, which has raised concerns throughout the region that the chances of a war on the peninsula are far higher than they have been at any time since the end of the Korean War itself.

Looking ahead to 2018, the major domestic news story, of course, will likely revolve in some way around the midterm elections coming up in November and, before that, the primary elections, many of which appear to be shaping up as battles between the Bannon/Trump wing of the Republican Party and what’s left of the so-called “establishment” wing of the party. As things stand now, Democrats seem likely to pick up seats in the House, although it’s as yet unclear if they can come anywhere close to winning back control of that body for the first time in eight years. In the Senate, the picture is far less clear. Thanks to the defeat of Roy Moore in Alabama, Republicans head into the midterms with only a one-seat majority and the prospect of having to defend open seats in Arizona and Tennessee that could switch sides under the right circumstances. At the same time, though, Democrats will have to defend far more seats in November than their Republican counterparts, including many in states that have been traditionally Republican in the past or which President Trump managed to win in the 2016 Presidential election. Based on current polling, things are looking up for Democrats but that could quickly and easily change as we get closer to Election Day.

Whatever the next year brings, here’s hoping it’s somewhat saner than 2017 was (who am I kidding?) and that we emerge from it in 365 days in better shape than we are today.