In One Week, Trump Went From A Call For Unity To Calling Political Rivals ‘Treasonous’

Last week, the President was calling for national unity. This week, he called political opponents "treasonous." 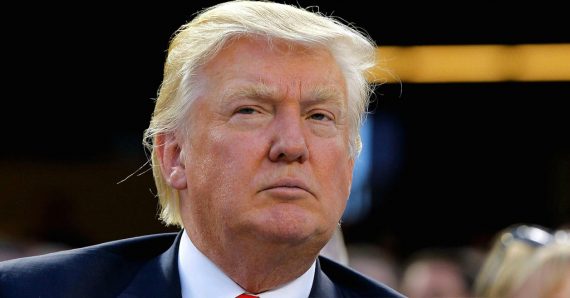 In his State Of The Union Address, President Trump received some praise even from otherwise critical commentators for his calls for national unity, which seemed to be a marked departure from the tone he had taken as both a candidate and in the first year of his Presidency.  Based on this, there was good reason to be skeptical that the speech signaled an effort by Trump to turn the page and perhaps the tone after a tumultuous and often bitter first year in office that contributed in no small amount to the fact that his job approval numbers, though they have improved somewhat, remain at historic lows for a new President. We’d seen similar efforts over the past year, and during the campaign, by Trump and those around him to seemingly put the negative rhetoric and the bombast behind them and move on to the realities of governing, and without fail they were quickly followed by actions or rhetoric that negates everything that the President said and returns to the vile rhetoric that has marked his career as a politician and, indeed, was a part of the “brand” he had developed on Twitter long before he became a candidate for office. Inevitably, as I suggested last week, the President does something that makes it appear that “a call for national unity rings hollow at best and hypocritical at worst.”

As it turned out, it only took about a week for the old Trump to return:

WASHINGTON — A week ago, President Trump stood before Congress as an improbable unifier. “Tonight,” he declared, “I call upon all of us to set aside our differences, to seek out common ground and to summon the unity we need to deliver for the people.”

This week, Mr. Trump is back to being a disrupter. After accusing Democrats of being un-American and even treasonous for refusing to applaud during his State of the Union speech, he said on Tuesday that he would welcome a government shutdown if he cannot reach a spending deal with Congress that tightens immigration laws.

A week ago, Mr. Trump called for a grand compromise with Democrats on the legal status of the undocumented immigrants known as Dreamers — a deal, he said, “where nobody gets everything they want, but where our country gets the critical reforms it needs.” After all, the president added, “Americans are dreamers too.”

On Tuesday, his chief of staff, John F. Kelly, said that many Dreamers failed to register for protected status with the government because they were “were too afraid to sign up” or were “too lazy to get off their asses.” He said he doubted Mr. Trump would extend the March 5 deadline that shields them from deportation.

Mr. Trump’s threat of a shutdown seemed to have little effect on the delicate negotiations on Capitol Hill to raise spending caps on military and nonmilitary spending — an agreement that, if passed by both houses of Congress, would pave the way for long-term deal to fund the government.

It was also not clear whether Mr. Kelly’s charged language about the Dreamers would affect the charged negotiations on immigration that will soon consume Congress, though it was the latest evidence that Mr. Kelly, a retired Marine general once viewed as a curb on Mr. Trump, shares some of his most hard-edge views.

Head-spinning reversals, of course, are nothing new for Mr. Trump. His positions on issues can gyrate more wildly than the Dow Jones industrial average. His is a presidency that has made the extraordinary ordinary.

After these latest remarks, the White House swung into its customary role of cleanup. The deputy press secretary, Hogan Gidley, played down Mr. Trump’s charges of Democratic treason as “tongue-in-cheek,” while the press secretary, Sarah Huckabee Sanders, muddied the waters on whether the president really planned to shut down the government.

Mr. Trump’s casual embrace of a shutdown — after the last brief shutdown, which he portrayed as a Democratic betrayal of America’s troops — drew an impassioned response from Representative Barbara Comstock, a Republican who represents a moderate district in Northern Virginia, an area that is home to many federal workers.

For others in Washington, however, there was a creeping sense of numbness. Mr. Trump has said so many outrageous things, has broken so many taboos and has insulted so many people that his latest outbursts no longer shock. To some, they seem more of the same.

It fell to Senator Jeff Flake, the lame-duck Arizona Republican who has emerged as a prime nemesis of Mr. Trump, to point out the novelty of an American president branding members of the other party as traitors because they did not celebrate him.

“Have we arrived at such a place of numb acceptance that we have nothing to say when a president of the United States casually suggests that those who choose not to stand or applaud his speech are guilty of treason?” he said from the floor the Senate. “I certainly hope not.”

Mr. Flake noted that “the president’s most ardent defenders use the now-weary argument that the president’s comments were meant as a joke, just sarcasm, only tongue in cheek.”

“Treason,” he thundered, “is not a punch-line, Mr. President.”

None of this should come as a surprise, of course. Every time it has seemed as though the President may have turned a corner or that the outrageous rhetoric and Twitter outbursts were becoming less common, Trump would emerge from the shadows to demonstrate that he is still the same fundamentally flawed person that he revealed himself to be during the campaign and over the course of his first year as President. This is, after all, a man who has engaged in a long line of outrageous statements that stretches back to long before he was a candidate for President. During the early months of the campaign for the 2012 election, for example, when he seemed to flirt with the idea of running for President only to make it apparent that the whole thing was largely a publicity stunt to drum up interest in the latest season of Celebrity Apprentice, Trump was the primary proponent of the birther conspiracy theories about President Obama that were quite obviously based largely on the color of the incumbent President’s skin.

During the campaign, he had plenty of vile things to say about Mexicans and Muslims, mocking disabled people, attacked women like Megyn Kelly and Carly Fiorina in the crassest and most demeaning manner possible, encouraged his supporters to engage in violence against counter-demonstrators, and demonstrated utter disdain for the Rule of Law and Freedom of the Press. He continued that theme of divisiveness during his first year in office, most notedly in the wake of violence that came with the alt-right protests in Charlottesville, Virginia after which he blamed ‘both sides’ for the violence and declined to condemn the groups who organized and participate in the rally such as the Ku Klux Klan or the broader so-called alt-right movement whose supporters made up the vast majority of the participants. The outrage over these comments was sufficiently broad, even from fellow Republicans in Washington, that the White House was compelled to have Trump deliver a follow-up comment the following Monday that was more measured and emphatic than what he had said before. Whatever damage had been repaired by that statement, though, was short-lived since less than twenty-four hours later when Trump repeated his ‘both sides’ argument in a press conference and repeated them again -a month later.

More recently, he attacked the mostly African-American N.F.L. players who declined the to stand for the National Anthem, calling them “sons of bitches,” and derided immigration from “shithole countries” such as Haiti as well as, seemingly, the entire continent of Africa. Earlier this week, he went back to the old habit of giving nicknames to his political enemies by referring to Congressman Adam Schiff, the ranking Democrat on the House Intelligence Committee, as “Little Adam,” and of course made his comment about Democrats who didn’t stand for his State of the Union address as “un-American and “treasonous,” a remark that the Trump campaign has turned into a campaign advertisement:

Perhaps most disturbing, although not surprising, is the fact that his Administration appears to be mimicking his rhetoric now rather than counteract it. Administration spokespeople such as Kellyanne Conway and others who appear on television regularly have increasingly been repeating and justifying even the most outrageous of the President’s statements, for example. In response to questions about the President’s attacks on Democrats at the State of the Union, White House Press Secretary Sandra Huckabee Sanders said that “Democrats are going to have to make a decision at some point really soon,” Ms. Sanders said. “Do they hate this president more than they love this country? And I hope the answer to that is, ‘No.'” Even John Kelly, the Chief of Staff who many believed would help moderate Trump to some degree has fallen in line, as evidenced by his comment yesterday that some people eligible for DACA relief were “too lazy to get off their asses” to apply for DACA status in the first place.

None of this should be a surprise, of course. As I said the day after the State of Union, Trump inevitably returns to his old form after these occasional periods when he appears to be acting “Presidential,” and it was inevitable that he would return to his traditional form. This is Donald Trump being Donald Trump, there’s no reason to believe he can or is willing to change at this point in his life. Indeed, the feedback he gets from his supporters, and apparently from his own advisers, is likely leading him to conclude that he’s on the right track. This is the President you voted for America, and barring something incredibly out of the ordinary, you’re stuck with him until at least January 20th, 2021.