Republicans Are Failing The Profiles In Courage Test

Profiles in courage? With Republicans in the Trump Era, it's more like profiles in cowardice. 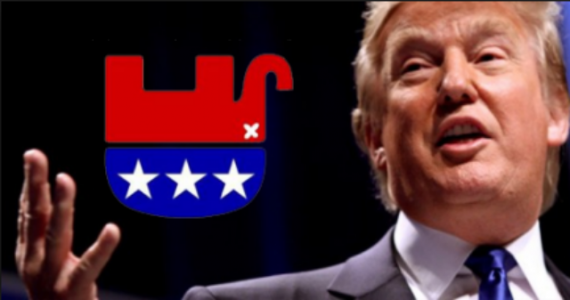 The Washington Post’s Jennifer Rubin notes that Republican officeholders continue to show that they aren’t up to the task of restraining or chastising President Trump:

Republicans still refuse to be candid about what the investigation has already found and why Trump’s attacks on the FBI and special prosecutor are themselves evidence of “corrupt intent.” It would be nice if they called out Trump as, for example, Sen. Angus King (I-Maine) did. “If they didn’t do anything wrong, why are they going to such extreme lengths to undermine this investigation, which is being carried out in a very responsible way? You have noticed there haven’t been many, if any leaks from the Mueller investigation, nonpolitical,” he said on “Face the Nation.” “They’re trying to get to the bottom of a very complicated set of facts. And anybody that says there’s nothing to it, well, they have already had three or four guilty pleas and 15 or 20 indictments. That tells me that there is something going on here, and there’s something serious.” Is it really so hard for GOP leaders to say something as obvious as that?

Instead we get these musings from GOP senators — who you’d never know had the power to restrain the president if only they put their minds to it. “I would hate to demoralize the workforce. And more importantly, I would hate to discourage new people from coming into that. So I just don’t like the whole tone,” Sen Marco Rubio (R-Fla.) complained on “Meet the Press.” He later said, “I think we need to be very careful about taking these very important entities and smearing everybody in them with a broad stroke.”

Gosh, might he directly admonish the president or offer legislation to protect Mueller? For now, Rubio seems unwilling to say flat out, “If Trump fires Mueller, that’s abuse of his office for which impeachment would be appropriate.” His job is not to offer punditry but to provide oversight and legislation as a co-equal branch of government. And it’s when it comes to Republicans’ real job in Congress that action is entirely absent. (Likewise, Rubio will offer an opinion about the need for a comprehensive response to Russia, but not criticize the president for refusing to deliver one. “There’s got to be a collective response to this. Vladimir Putin is a cost-benefit analyzer,” he said.)

Voters should pay close attention to Republicans’ lack of candor, curiosity and spine in defending the Constitution and upholding their oversight obligations.

As Rubin notes elsewhere in her column, the only Republicans who seem to be willing to speak out against Trump and the White House are the ones who have nothing left to lose at this point. This includes both Arizona Senator Jeff Flake and Tennessee Senator Bob Corker, both of whom have announced their retirement from the Senate at the end of the current term and are thereby removed from the electoral or other pressures that might be applied to a Republican on Capitol Hill by the White House. Similarly unrestrained is Arizona Senator John McCain, who is currently undergoing treatment for cancer back home and who has recently called out the President’s pick of Gina Haspel to replace Mike Pompeo at the C.I.A. and his comments just yesterday in response to the reports about the President’s obsequious phone call to Russian President Vladimir Putin.

Look beyond this rather short list of outgoing Republicans, though, and you find that the overwhelming response of Republican officials on Capitol Hill from Speaker of the House Paul Ryan and Senate Majority Leader Mitch McConnell all the way down to the least senior members of both the House and Senate is either silence or mealy-mouthed nonsense. In many cases, in fact, what you get isn’t just a refusal to criticize the President for even the most bone-headed and outrageous things that he’s done but a willingness to defend them, typically by pointing out some alleged thing that former President Obama or former Secretary of State Hillary Clinton are alleged to have done. Indeed, a large part of the criticism that has been unleashed on the Mueller investigation and the F.B.I. investigation that preceded it has included the effort to follow the President’s lead in undermining it and alleging that the investigations have been tainted from the start by ties to the Clinton loyalists and others.

In normal circumstances, perhaps, the fact that legislators who belong to the same political party as the sitting President can be if not forgiven at least understood in why they are not speaking out in the same manner that they would if a President from another party did the same thing. Partisanship has long been part of our political system, and that’s not going to change anytime soon. Additionally, politicians need to take their interests to heart when they are trying to do their job and getting under the skin of the most powerful member of your own political party isn’t exactly the smartest political move for most people on Capitol Hill with the possible exception of those small handful of legislators who have some kind of independent base of power or support. The number of legislators in that position, though, has always been fairly small. For the vast majority of the elected officials on Capitol Hill, loyalty to both the party leadership and the President (if the President is a member of your own party) is simply part of the price of admission to the game. That’s not going to change significantly in the foreseeable future.

The problem is that we are not living in an era where normal circumstances can be said to apply.

Even before he became President, Donald Trump was demonstrating that he was uniquely bad and that allowing him to continue to speak out and act without an appropriate response was effectively endorsing and encouraging him. This is the man, after all, who spent months in the spring of 2011 traveling around the nation as the press covered his increasingly unhinged remarks about the President’s place of birth. Once he entered the race in 2015, Trump’s campaign depended mostly on being outrageous and appealing to the worst aspects of American politics. From the start of his campaign, the President’s speeches, media appearances, and Tweets included instances of making bigoted comments about  Mexicans, John McCain, Megyn Kelly, Carly Fiorina, Ben Carson, a disabled New York Times reporter, and Muslims in the most crass and demeaning manner, encouraging his supporters to engage in violence against supporters, and demonstrating utter disdain for the Rule of Law and Freedom of the Press. During the campaign itself, he did everything from attacking a Federal Judge and the parents of a soldier who gave his life in defense of his fellow soldiers to defending demeaning and sexually graphic comments about women that he made during a taping of Access Hollywood. With only limited exceptions, the condemnations from Trump’s fellow Republicans were mute and weak.

Once he became President, Trump continued to make the same kind of outrageous statements and he has been presiding over an Administration that repeatedly backs up the lies, half-truths, and insults that flow from his Twitter account on a daily basis. In the wake of the tragedy in Charlottesville, for example, he proceeded to make comments that defended the alt-right leaders and participants in the march as “very fine people.” Additionally, Trump has spent the better part of the past year seeking to undermine what is clearly a legitimate investigation into Russian interference in the election and possible collusion between Trump campaign officials and people connected to Russia. All of this has passed with only minimal condemnation from Republicans on Capitol Hill or from top Republican officials nationally.

Back before Trump was elected, I noted that the Republican Party had reached what might be called a “Time For Choosing,” a reference to the speech that Ronald Reagan delivered on the eve of the 1964 Presidential Election in what was basically a last ditch effort to save Barry Goldwater from electoral disaster. Roughly a year later, in the wake of the President’s attempt to defend the alt-right participants in the violence in Charlottesville last August, I argued that they faced yet another choice. Either they could see that event and the President’s response to it as a clear indication of the kind of man and kind of President is and distance them from him, or they could cozy up to him because it meant they could get things like Obamacare repeal or a tax bill signed into law. By standing by the President even as the pre-campaign news got worse and, later, as Trump’s Presidency demonstrated that even the most pessimistic of predictions about what electing him would bring about proved to be far too optimistic, they have indicated quite clearly which path they have chosen. How they are going to deal with the consequences of that choice is unclear, but it seems clear that it’s not going to be easy for them to back away from what Trump has done and continues to do to their party and to the country.

More than fifty years ago, before he became President, President John F. Kennedy wrote a book called Profiles In Courage that told the stories of eight former Senators who had demonstrated, in some way or another, courage in the defense of their beliefs and of the nation. If someone were to write a similar profile of the Republican Party in the Trump Era, the only appropriate title would be Profiles In Cowardice. Because that’s all that’s left of the Republican Party, Trump fanatics who are beyond reason, sycophants who are being obsequious to power because they think it will advance their own career, sellouts who have sold themselves to the powers that be, and, finally, cowards who know what they’re seeing is wrong but are too afraid to speak out against it. While I don’t know for sure, I suspect that most of the Republicans on Capitol Hill fall into the last category. They know there’s something very wrong going on, but they’re too afraid to speak out against it. Of all of them, the cowards are the worst and they’re the ones who should have the most trouble sleeping at night. 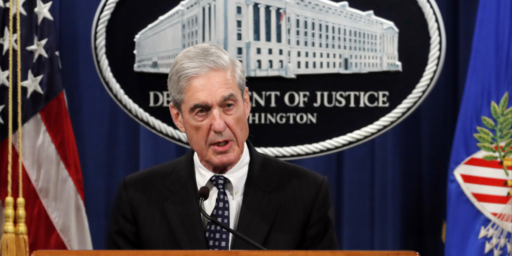 Congress And The Country Prepare For Mueller Time