Polls released since the Parkland, Florida shooting show that support for gun control measures is at its highest level since 1993, but will it last? 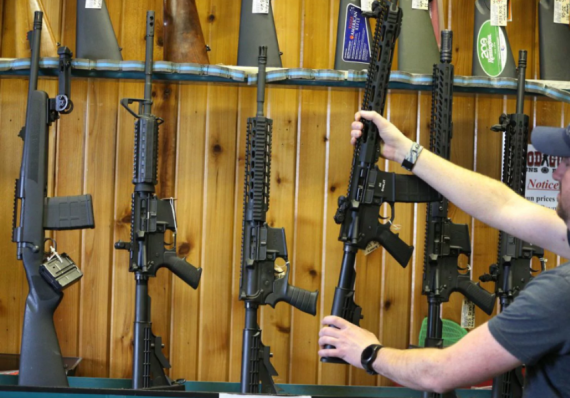 As James Joyner noted earlier today, students in High School and many Middle Schools are walking out of class today in support of the political cause that has arisen in the wake of the shooting at Marjory Stoneman Douglas High School, which occurred one month ago today. In that same regard, Scott Clement notes today in The Washington Post that support for many gun control measures is at the highest level it’s been in more than two decades:

A Gallup poll released Wednesday found that 67 percent of adults say laws covering the sale of firearms should be “more strict,” up seven points since October and up 20 points since 2014. No Gallup poll has shown higher support for increasing restrictions since 1993, when two-thirds of the public supported stricter laws just after Congress passed the Brady Handgun Violence Protection Act, which mandated background checks for gun purchases from licensed dealers.

The Gallup survey also found that the percentage of Americans who said that “guns” or “gun control” was the nation’s most important problem jumped from 1 percent in January to 13 percent this month, vaulting to a record high in monthly surveys tracking the issue since 1994. Guns trailed only “dissatisfaction with government” at 22 percent, and topped immigration (9 percent) and race relations (7 percent) as the nation’s most important problem.

The Gallup survey echoes three other polls showing an increase in support for gun restrictions a month after a mass shooting left 17 teenagers and educators dead at Marjory Stoneman Douglas High School in Parkland, Fla.

In its polling about support for gun restrictions over the years, Gallup has found that support peaked at 78 percent in 1990 and stood above 60 percent up through 2000 before dropping into the 50 percent range for most of the George W. Bush administration and falling below 50 percent during most of the Barack Obama years. Support rebounded to 55 percent in 2015 and 2016 and hit 60 percent in the fall, the most recent survey before last month’s mass shooting in Florida.

On the question of political pressure, a Post-ABC poll immediately after last month’s shooting found clear majorities saying that President Trump and Congress are “not doing enough” to prevent mass shootings. And there are signs that Democrats have become more willing to make gun laws a litmus test for candidates in the immediate aftermath of Parkland.

From 2004 to 2013, 30 percent or fewer Democratic, Republican or independent registered voters said they could not support a political candidate they disagreed with on “gun control,” according to Washington Post-ABC News polls. But a Quinnipiac University poll asking a similar question in February found nearly half of Democratic registered voters, 47 percent, saying they could not vote for a candidate they disagreed with on “gun laws.” That was more than double the 21 percent of Republicans who said a candidate’s gun position was decisive in their support.

This chart shows how support for gun control has varied in the Gallup poll since 1993: 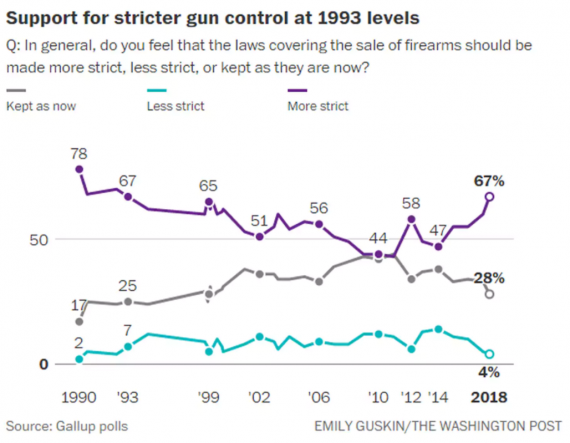 And this chart shows how polling on gun control since the Parkland shooting has changed: 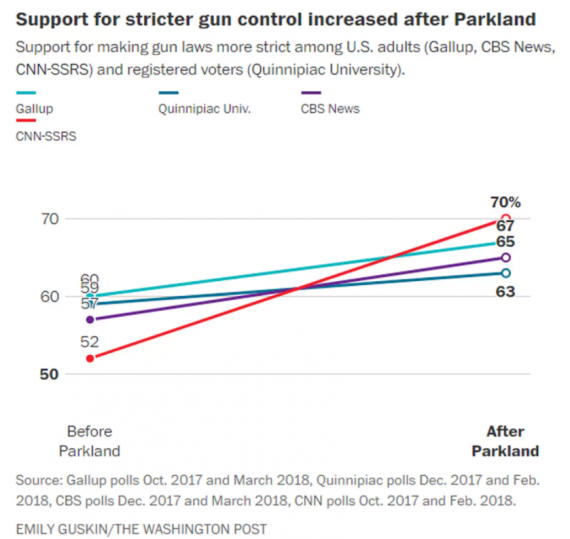 While these numbers may boost the hopes of gun control advocates that the public is coming around to their side, it’s worth noting that we’ve seen increases in perceived support for some gun control measures before only to find that it has had little impact on either gun control policy or the outcome of elections. In the wake of the worst such event in American history, the mass shooting in Las Vegas, the worst such event in American polls indicated increased numbers in support of certain gun control measures. Despite this, there was little movement on the issue in Congress even on the seemingly easy issue of banning bump stocks. The same thing happened after the shooting in December 2012 at Sandy Hook Elementary School in Newtown, Connecticut. At least initially, the images of that attack, with so many of the victims being young children, led many Americans to voice support for stricter gun control laws. Even in the wake of that horrific tragedy, though, it was clear from those same polls that gun control was not a high priority issue even when it came to issues such as stricter background checks or banning so-called “assault weapons.”  Inevitably, as time passed and the memory of Sandy Hook or other similar mass shooting events faded into memory, the polls showed support for stricter gun control began to fade. Within three months of Sandy Hook, for example, polling was already showing that gun control was slipping as a priority for voters. Within a year after the shooting, support for most gun control measures had fallen back levels they were at prior to the shooting. By the second anniversary of Sandy Hook, polling indicated that more Americans supported protecting gun rights than passing new gun control measures. By the time of the third anniversary of the tragedy, polling showed a majority of Americans opposing a ban on the type of weapon used in the Sandy Hook shooting, If history is any guide, then this is what is likely to happen this time as well.

All of this brings to mind something Kevin Drum wrote in the wake of the defeat of the Manchin-Toomey bill, which was put before the Senate mere months after the Sandy Hook shooting That bill would have expanded background checks and purported to close other loopholes in the background check system, It also happened to be an issue that enjoyed at the time, and continues to enjoy, widespread public support even among Republicans, conservatives, and gun owners:

about 80 percent of those Americans think it sounds like a reasonable idea but don’t really care much. I doubt that one single senator will suffer at the polls in 2014 for voting against Manchin-Toomey.

I made a similar observation at the time:

It’s possible, of course, that this time could prove to be different. The activism of the High School students from Florida who survived the shooting and others at or near their age has been particularly effective at keeping this issue at the forefront of the current political debate, and it has even resulted in what could be real changes on the part of Republicans nationwide. That fact can be seen in today’s walkouts and in the protests that are planned around the country for next Saturday, March 24th, which will reportedly include marches in Washington, D.C., New York City, and around the country. In that regard, we’ve seen at least some signs that things could be different this time. A number of national retailers, including Dick’s Sporting Goods, Walmart, Kroger, and L.L. Bean have changed their policies and said that they will not sell any firearms to any person under the age of 21. Last week, Florida enacted a new law that raises the minimum age to buy any firearm to 21 in that state, bans bump stocks, and takes other steps that probably weren’t likely prior to the shooting last month. Of course, lawsuits have already been filed against the private retailers and against the new Florida law, but these developments, the fact that the students from Parkland appear to be gaining nationwide momentum, and the fact that the midterm elections are only eight months away could mean that we’re entering a new political era when it comes to gun control.